Did you say swing dancing!?

Swing and jazz were born in the 1930s. In famous cabarets such as the Cotton Club in Harlem, Afro-American musicians spread a wave of joy, battling against the Great Depression after the war. Since the 1980s, swing dances – the Lindy Hop, Balboa and Jazz Roots- have been making a come-back; first in the UK, the USA and in Sweden, before spreading all over Europe. Swing has been reborn, creating a very vintage vibe everywhere it goes.

The Lindy Hop, a popular partner dance, whose roots can be found in the Cake Walk, Boogie Woogie and the Charleston, was later pushed aside to make way for Rock’n Roll. Frankie Manning (1904-2009) was an American dancer, instructor and choreographer. He is considered all over the world as one of the founding fathers and ambassadors of Lindy Hop!

Jazz Roots, also known as Swing Routines, are danced solo. They originate from the Charleston swing years and tap dancing. These Routines are often the highlight of an evening where dancers come together for the Shim Sham, the Big Apple, the Trankee Doo, the Madison, etc… 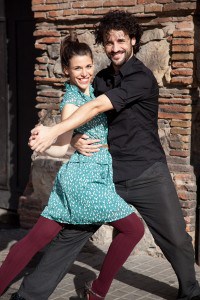 Blues dancing, like Swing dancing, stems from African movements and rhythms, with a more intimate connotation, linked to Blues music. Today, this dance is inspired by former types but also places importance on the connection between yourself, your partner and the music, improvisation and bodily movement, based on shifting your weight from side to side. > Live demo

Would you care to dance?

Take part in the Nant-in-Swing WEEKEND WORKSHOP (May 31st and June 1st) at the “Maison du Dix” community centre in Chantenay / Nantes, with our three teacher couples.

Join us every night for an INTRODUCTORY LESSON:

More information about swing dances in Nantes and Rennes at: